Carbon and the Ocean – Could whales hold the answer to combating climate change?

Carbon and the Ocean – Could whales hold the answer to combating climate change?

To properly understand the role of the ocean and of whales in carbon sequestration, it is important that we first discuss and understand the carbon cycle. Carbon is found in both living and non-living species on earth, and is constantly being taken in, stored, or released within the environment. For example, carbon is found in the sea, stored by organisms in their bodies, in rocks, or within the soil. Anything that releases carbon into the atmosphere within this cycle is known as a carbon source. The time that carbon is stored in a source can vary from a few days to millions of years, meaning that there is a constant and ever-changing flow of carbon within the environment on earth between the ocean, the air, and the land. These work together and affect each other, and the carbon cycle is the movement and interaction of carbon between these sources, as seen in the image. 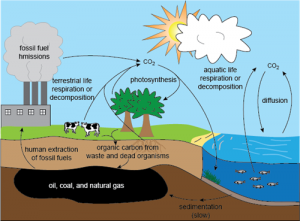 Carbon sinks are responsible for storing carbon, and usually in large amounts. Within the marine world, examples of good carbon sinks are phytoplankton, as well as seagrass beds, mangrove forests, and, as more recently identified, whales. Unfortunately, when resources are removed from the environment or used up, the carbon stored inside of them – which has sometimes been locked away for hundreds and thousands of years – is released back into the environment, and over time can have negative effects on the world around us, such as by global warming.

The role of marine life in the carbon cycle

The ocean regulates carbon dioxide in two main ways: biologically and physically. The biological route is where the importance of whales comes in, as this involves the eventual transferral of carbon to the seabed for long term storage by building up through different levels of the food web. This occurs when small animals and vegetation such as phytoplankton take up carbon dioxide from the atmosphere during photosynthesis. Other marine animals then eat the carbon-filled phytoplankton and when those animals are eaten, the carbon continues to build up within the food web in a chain, before the animals die, sink to the sea floor, and the carbon becomes stored for hundreds of years. 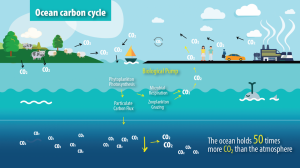 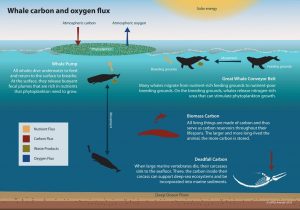 The future of carbon and the ocean

Some scientists believe that the true level of carbon capture of whales is still unknown, and could potentially reach astonishing levels. It is therefore vital for the climate that ocean life, in particular whales, have increased protection. Although threats to whale populations such as the capture and killing from whaling has been reduced, whale populations have yet to recover fully from the wide-scale whaling of the 20th century, and are still facing direct impacts from humans and through climate change. It has been calculated by the International Monetary Fund, that if blue whales alone were allowed to recover to numbers they had during pre-industrial whaling, they would store up to 11 million tonnes of carbon each year, which is the same as a forest the size of Los Angeles. Therefore, increasing the protection of these species and of marine life as a whole could mean great things for combating climate change and protecting the environment of Planet Earth.