Life on land is loud – something I am currently experiencing first hand as I sit in my room in London, trying to ignore the constant traffic, sirens, alarms and passersby. It’s hard to hear anything over the noise! Think soothing thoughts, I say to myself and my mind drifts back to the sea; an aquatic soundscape of waves, bubbles, shingle rolled across the ocean floor by currents, whale song, creaking icebergs….

Unfortunately, this paints a rather perfect picture as our oceans are becoming noisier due to human activity.

The subject and study of effects of noise in the ocean is a fairly new one, throwing up many conservation worries. Increasing levels of noise in the ocean affect all marine creatures, in particular the cetaceans. Cetaceans rely heavily on various vocalisations and other sources of sound for communication, feeding, navigation, recognising one another, avoiding predators, capturing prey, selection a mate and bonding between a mother and her calf.

In addition to vocal displays, cetaceans also produce other sounds by slapping their bodies on the surface of the water, or by slapping body parts together to create a distinct sound, like breaching (where pectoral fins and the whale’s body are used for slapping), flipper slapping and jaw claps, which are produced by clapping the jaws together forcefully – this is often used as a sign of aggression in toothed whales.

Given that sound is such an important part of a cetacean’s life, increasing levels of noise in their world is a serious problem. When you rely so heavily on listening to tiny sounds in order to survive, turning up the background noise can make things extremely difficult! Imagine if you were blindfolded and trying to walk towards someone whistling fifty-metres away – you could probably do it. Now imagine the same thing but with an orchestra playing – you’d probably be wandering around lost for a long time! It’s the same for whales; their natural behaviours (like surfacing and diving, or finding food) are confused by background noise. Changes in these behaviours mean that really important functions such as feeding and reproduction would almost certainly be negatively impacted.

So, far from being the tranquil, silent world we all imagine,

the oceans are teeming with the booming sounds of life. Sound waves travel about five times faster and much further through water than they do in air, so adding noise made by humans (anthropogenic sound) in one place can have huge impacts on ocean life tens (or even hundreds!) of miles away. The sounds that humans create in the ocean are getting louder and louder. In 2019, there are around four times as many ships in the sea as there were in 1992, and they are travelling much faster. To a pod of whales, that’s like the difference between having a chat outside your front door and trying to shout across a busy motorway! All that shouting (for whales as well as you) is a stressful business: it takes a lot more energy and could cause cetaceans a lot of harm.

Now, let’s imagine having that conversation again, but some of the cars – about one in four, are beeping their horns. This is what is happening in the oceans – about a quarter of the ships in the world are equipped with sonar systems, which are artificial versions of the sonar used by cetaceans to find food. These systems fire loud “pings” into the ocean and listen for the echo, but by getting in the way of the whales’ and dolphins’ sonar they can confuse the animals and cause them to get lost, or not find food… or both. 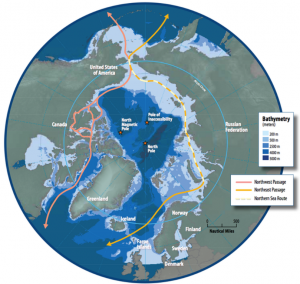 Of course, the sensible solution for our pod of whales would be to move away from the ships – after all, the ocean is a big place and ships tend to travel in fixed “lanes” from one port to another. But there’s another problem…climate change. In the last few years, the ice cap over the Arctic has melted and opened up a channel of water called the North West Passage, (which links the Atlantic and Pacific oceans). This new channel of water is allowing ships to pass through and travelling in the same area as 80 populations of marine mammals for the first time ever.  Those which rely on sound to survive – especially narwhals, bowhead and beluga whales – are now finding life much harder. A group of scientists are, as you read this, carrying out huge surveys of all these populations to see what impact the these new ships are having on cetacean life.

With commercial shipping set to increase, not only in volume but also speed, the noise levels in our oceans will rise. But it may not be all bad news because there are those who are fighting to protect our oceans for those who live in it. Last October, the International Maritime Organisation had a large meeting where over 100 countries talked about how to make the shipping industry more environmentally friendly. A letter from 10 organisations, including the World Wildlife Foundation (WWF) and Whale and Dolphin Conservation North America, has also explained why speed of ships in the ocean should be restricted. This would mean less noise, less air pollution and not so many accidents between ships and animals (ship strikes). After all, how would you rather have a conversation- in your quiet garden, or shouting across that busy motorway?