So, how is our most endangered cetacean actually doing??

So, how is our most endangered cetacean actually doing??

In Spanish, “vaquita” means “little cow”, and “little” is about the best name for one the smallest species of cetacean living today. Averaging less than 150cm in length, they are incredibly difficult to find. Not only are they shy and fearful, but they are also one of the rarest creatures on the planet. 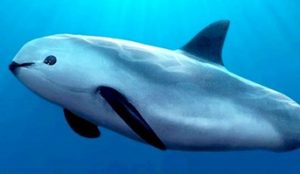 The Vaquita: Maybe the most endangered cetacean on Earth. Illustration from ecowatch.com.

Vaquita are small but distinctive; dark circles around their eyes and black “smiling” lips set them apart from most other porpoises. Of course, they aren’t actually smiling – just like dolphins, the shape of their jaw has an upward curve that makes it look like they are. Unlike most dolphins, though, they have no snout, instead, their jaw sits back in their head. Scientists think this allows them to feed more generally, increasing the amount of food available to them in their coastal habitat. Just like many whales and dolphins, vaquita use echolocation to pinpoint their prey underwater when hunting.

The range of the Vaquita (in blue, on the West coast) is tiny compared with most cetaceans.

, there is only one place to go. Their range (the area where they live), is described by Dr Anna Hall, a researcher at the Porpoise Conservation Society, as a “pinprick”. At the northern end of the Gulf of California, just off the coast of mainland Mexico, is an area of about 300km2 where you might spot one the elusive mammals. A pinprick, perhaps, on a world map, but with fewer than 20 individuals estimated still to be alive, the chances of an encounter are slim and diminishing. Porpoises are not curious in the way that most dolphins are – they don’t usually approach boats, don’t breach and have smaller dorsal fins, which makes them

hard to spot when they come up to breathe. Considering their small size, you would be incredibly lucky to get a glimpse.

With so few vaquita living in the wild and such a small chance of sighting one, scientists have had to resort to other ways of keeping track of their numbers to see if their conservation efforts are having any impact. This is mostly done with sound – an array of underwater microphones has been placed where the vaquita live, listening for distinctive calls. Each animal sounds slightly different, so conservationists can work out how many are out there in the open ocean. 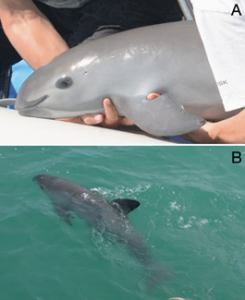 The young female captured by the VaquitaCPR project – named V01F – at its capture (A) and release (B) after just 4 hours.

Sadly, the plight of the vaquita is a familiar tale of our own impact on the ocean. Their restricted range and costal habitat puts them right in the danger zone for fisheries, and static nets in coastal waters accounted for the accidental catching and killing of over 90% of the vaquita population between 2011 and 2016. At that point, the Mexican government banned this type of fishing, but illegal nets are still found in their range. Sadly, these nets are usually placed to catch another endangered species – the totoaba fish – whose swim bladder is highly sought after for use in Chinese medicine. This oceanic poaching is easier and more lucrative than drug trafficking, and so difficult to police that it is driving both species to almost certain extinction.

By the end of 2016, the Mexican government had begun an unprecedented commitment to protecting Vaquita in captivity. For many species, this is a well-rehearsed last resort, but marine mammals are notoriously difficult to provide for. In 2017, a team of 90 researchers and vets were assembled to a project costing $5 million called VaquitaCPR. The idea would be to move half of the wild population – estimated at around 30 at the time – into protected “sea pens”. The team captured two females. The first, a juvenile, showed signed of serious stress and within hours had to be released back into the wild. The second, caught on 4 November 2017, also had to be released after four hours, but suffered a cardiac arrest and died shortly afterwards and the project was stopped.

For now, efforts to protect are more targeted – gillnets are being removed, individuals are being monitored by photographs and acoustics, and the range is being patrolled. But, with so few individuals left, the future of the world’s smallest porpoise is hanging in the balance.