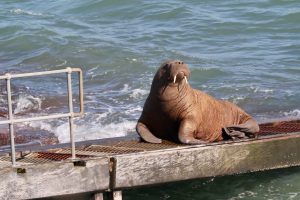 Wally the walrus has been causing a stir in Wales and has captured the heart of the public. While Wally’s initial appearances were sporadic and in often hard to reach places, he spent around a week in Tenby, hauling out on the RNLI slipway where he was observed- from a safe distance- by several Sea Watch observers.  People flocked from the surrounding countryside and further afield- sometimes in breach of pandemic guidelines- to see this rare Arctic animal in Pembrokeshire 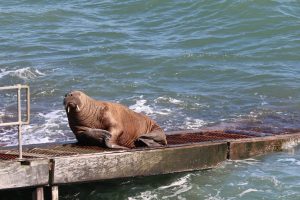 Unfortunately, all this fame may not have been in the best interest of Wally. While the RNLI slipway was in some ways an ideal haul out as it allowed people on foot to easily see him from a safe distance and made it impossible for him to be approached on foot, it also meant that he was very visible to boat operators who did not face the same issue. The longer he stayed in Tenby, the more attention he attracted and the more difficult it became for Wally to get some much needed peace and quiet between his foraging trips. Although attempts were made to keep boats away from him, many instances of the walrus being closely approached by boats were reported. 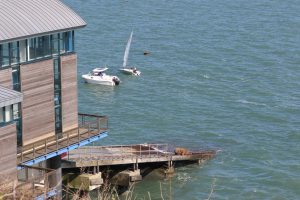 During our own (socially distanced) land based watch, we photographed several vessels that approached Wally to within perhaps 30m, much closer than advised by marine code of conducts. We observed him sit up and look around several times, apparently watching the boats though he did not go back into the water. We received a number of casual sightings from other local observers over the last week but since Monday, Wally has disappeared.

Boat traffic disturbance is a well known phenomena and has been widely documented in marine mammals. Studies by the Sea Watch Foundation have shown a correlation between high boat traffic rates and lower bottlenose dolphin sightings rate and there has been some evidence from Cardigan Bay that suggests high levels of boat traffic may impact social structure in bottlenose dolphins as well. It is understandable that people want to get close to wildlife, particularly after being confined by a pandemic for months, however if we want to enjoy these wonderful animals in the future, it is also vital to view them responsibly.

Apart from the physical threat of collision, the noise generated by motor operated vessel can affect marine mammal in other ways; in the case of dolphins who often rely on sound as a daily part of their life, it can directly disrupt them while capturing food, locating and communicating with one another. High noise levels may also deter other marine mammals, such as seals- or in this case a walrus- to forage in the area.

Pinnipeds, such as as seals or in this case a walrus, are more vulnerable to disturbance while they are hauled out when they are attempting to rest. High levels of boat traffic may result in increased alertness, as was observed in the case of Wally, and flight into the water, disrupting vital resting periods and potentially causing injury as they scrabble to get into the water.

If you are hoping to see Wally, or some of the fantastic native Welsh wildlife, please be sure to do so responsibly. Always keep a distance of at least 100m and look out for signs of distress such as increased vigilance. In seals, this may include behaviours such as the repeated lifting of the head or moving towards the water.

If you are hoping to go on a boat based wildlife tour, SWF curate a list of recommended boat operators that abide by a strict code of conduct to reduce wildlife impact: https://www.seawatchfoundation.org.uk/recommended-boat-operators/

We also work closely with the WiSe scheme to educate boat operators and recreational users in appropriate, wildlife safe operations. The next course date is set for the 26th/27th April and further information is available on the WiSe website: https://www.wisescheme.org/

If you do spot Wally- or other marine wildlife- please report your sighting to the Sea Watch Foundation! Sightings of Wally will be handled confidentially and not publicised on the website to prevent undue disturbances. Please contact: sightings@seawatchfoundation.org.uk