Last month brought with it a whole host of marine news, with perhaps one of the most fin-tastic Newsplashes being the sightings of two killer whales, John Coe and Aquarius, swimming off the West coast of Cornwall. This encounter is special because these particular killer whale, or Orca, as they are also known, have not been seen for more than ten years! Marine observers and wildlife lovers alike are hopeful that this may mean further sightings of the rest of John’s orca friends, known to marine observers as the ‘West coast Community’. 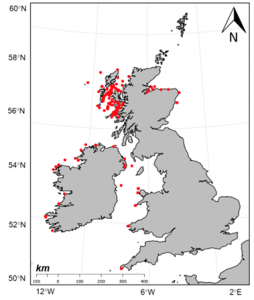 The West coast community is a pod of killer whales, originally with up to twenty members, but with most recent pod size made up of four males and four females. This group is important to researchers because they are the UK’s only known resident population of orca. John Coe and Aquarius are just two of the males from this orca pod, with the where-abouts of the other members currently unknown with no sightings since 2016.  Usually, John and the other orca from this group are most often located around the West coast of Scotland, so to have been spotted in Cornwall means they have travelled a very long distance! 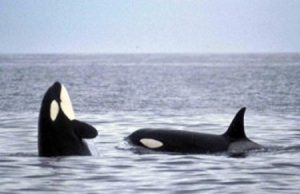 In fact, this is the first time this pod has been spotted this far from their usual location, as confirmed by the Sea Watch Foundation, Hebridean Whale and Dolphin Trust and the Irish Whale and Dolphin Group. Their adventure was short-lived though, as just nine days later, both Aquarius and John Coe were seen back in their usual habitat within the Hebridean seas. However, we are sure they had a whale of a time!

Sadly, as with most marine animals, John Coe and his friends are at risk of extinction from human activities, with pollution being one of the biggest threats to this particular group. Researchers and scientists believe that pollution from some chemicals called PCBs (Polychlorinated biphenyls) may be the reason why the pod have not been able to give birth to future generations and numbers have declined. However, by working together on research and orca spotting, with the help of our lovely supporters such as yourselves, we hope that we can continue to monitor and care for marine animals like John Coe and his friends. Where do you think he will turn up next?!

Although sightings of John Coe and his friends can be few and far between, once you know your orca facts, these animals can be easy to spot and identify! Did you know that orca are the largest of the dolphin species? They have black backs and sides, white bellies, and white ovals patches around their eyes. In fact, they are completely black and white all over! Orcas also have very large, tall fins on their backs known as the dorsal fin as seen in the image below, which can be really helpful when looking for them in more choppy waters.

You can find more facts on orca or any marine species on the Sea Watch Foundation website. There are lots of different fact sheets about all kinds of marine animals to help you learn more about their lifestyle and how to spot them off some of the UK coastlines.

Follow the link: https://www.seawatchfoundation.org.uk/information-and-fact-sheets/ to explore and find out more. 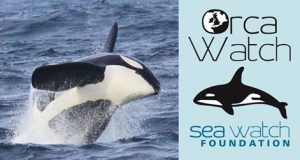 If you simply can’t wait to get involved and have a go at spotting some of the orcas that live in our oceans, you can check out our annual orca watch event! Orca watch is usually a ten-day event in John O’Groats, but with watches taking place all around Caithness and North Sutherland, and around the Orkney and Shetland Isles.  Lots of people come together to learn about orca and volunteer to help collect sightings and location data on different individuals and pods. The event is a great way to brush up on sightings skills and meet lots of friendly wildlife enthusiasts, researchers and scientists.